I can't say enough things about how much I love Katie's Clinic and how it has impacted our life. This is a 10 minute video about Rett Syndrome and the clinic, I think watching it would be 10 minutes well spent. Thank you to everyone involved with Katie's Clinic, you are my heroes.
Posted by Colleen at 3:43 PM No comments:

My Journey to New Orleans and Normal

Last Thursday I sat in an airport early in the morning smirking to myself. I breezed through security with just my little backpack while I watched many with children struggle to keep composure. It was very early. Many of the kids looked tired and I saw a few parents who appeared to be having slight challenges with communication. I smirked because in that moment, it wasn't me. It normally is. I am nearly always exhausted and struggling to complete whatever task I have in front of me, whether it be getting groceries or taking the girls to the neurologist, I am most often on the very edge of sanity, so I really savored the calmness that was travel by myself. I was on a journey to New Orleans, for the 7th World Rett Syndrome Congress, to be by normal people. New Orleans was wonderful. The food was tasty, the people were so friendly and vivacious, there was a spirit of resiliance in the air. As always, I loved being with my rett family. I met a few new faces and saw some people that I have known for a while and have a special place in my heart. The days were full of presentations with slides filled with phrases like "neurotransmitter pathways" "management of symptoms" and "synapitic efficacy". The nights were filled with great company, eating hot food and glorious, uninterrupted sleep. As the conference wound down a researcher, Dr. Huda Zoghbi spoke. She had slides like this and if I am honest I didn't exactly understand every word but I got the general gist, they are figuring it out, they are getting closer. 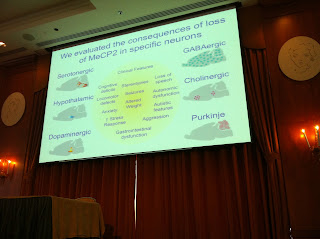 It's no longer a matter of if but when. Nobody talked about a complete cure, rather a substantial reduction in symptoms, I'll take it! With that it was time to head home, still tired but a little renewed. I was reminded that I am not alone, that Rett Syndrome is not a death sentence, there is a lot of life to be lived within it and that soon it might get a little easier. There was a hurricane about to blow in so I was happy to get on a plane and get out of there. Again, I found myself sitting in an airport, this time a little less cynical. There was a family traveling with their two children, all wearing Make A Wish shirts, I certainly didn't smirk at them as I recalled the turbulent time in our life that we went through an airport for Claire's wish. I recognized lots of faces from the conference, without their badges and their children, they blended right into the hectic airport scene. Made me think, maybe everyone else has a crazy story just like mine, you just can't tell when they aren't wearing their badge. There is a saying among motorcyclists: There are two kinds of riders, those that have gone down and those who will. Doesn't this apply to life as well? I need to remember this. When people say insensitive and hurtful things, it's most often because they don't have a clue, but eventually they will. Nobody gets through life unscathed. You just don't know that until you are on the other side, but at least the other side for me brought with it some of the most amazing people and the ability to be in a room and know that everyone in the room in on the other side too.
Posted by Colleen at 9:25 AM 3 comments:

It must be the deeper levels of fatigue setting in but lately I have been struck by a series of moments rather strongly. I will be in the middle of something when all of the sudden I wake up and the reality of it smacks me in the face. Last weekend it was just after Chloe's first hair cut. Typically Saturdays she and Jared spend time together while Claire is at Kid Quest and I get to vacuum and fold laundry in the peace of an empty home. Since the hair cut was a big deal, I tagged along with them. Since it was unbelieveably lovely outside, we decided to walk down the street and stroll along the cliffs. 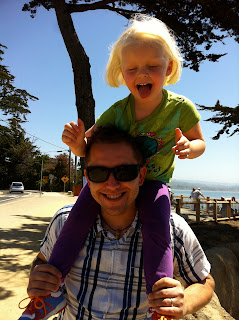 It was amazing. It was so effortless and easy. Even with Chloe the crazy three year old, it seemed effortless. I commented to Jared that this must be what life is like for the many people that we see out and about. Even with hard stuff, this 'normal' life with just the three of us felt pretty great. At the same time, it was a harsh reminder of just how much work Claire takes, even on the easy days. I really struggled with the guilt of enjoying our family so much without Claire there. To make it even harder, Claire hasn't been having many good days. It has been a series of hiding in corner while she has her dystonic episodes or seizures. I eventually get tired of this and then try to do more stuff at home to which she responds with hatred toward me as she would clearly rather not be out in the world. A week of this drove me to the ragged edge of sanity yesterday. I've been trying to hold it together. I knew that my break was coming, I just had to make it to Wednesday night then I could pack my bags and go get on a plane. I have been trying to make peace that the fact is, this is our normal but lately I just haven't been able to get to that place. I hate that her brain freaks out from good stuff. I understand seizures from flashing lights or even extreme illness, but the use of her hand? Really? This is cruel! In the last week she has been working on using her non-dominant hand purposefully. It has been a solid three years since this has happened, it's a big deal! But I have to try not to get excited because if I praise her for her hard work she works harder and then her brain explodes and her body twitches and she stops breathing and I just won't except that this is going to be our normal, i hate it. In an effort to make sense of it, maybe see something that I was missing so that we could fix it and stop this, we went to see our lovely neurologist today. That was when I was hit yet again, this time with a memory. We typically see our doctor at a different clinic that is closer to where we live but to get in sooner, we went to the location at the hospital. As we walked down the hall to our room I for some reason looked into one of the open doors. It was the room that we sat in for our "follow up" to the phone call we got, the one that they told us that the test for Rett Syndrome came back positive. As I pushed Claire down the hall, Chloe hanging on my shirt, I burst into tears. I had forgotten about that day. About the horrible feeling as the doctors pretty much told us nothing that was helpful or encouraging. Then just as quickly as it hit me I was over it. Chloe had climbed up the table and wanted to jump off it. 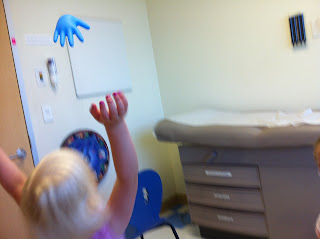 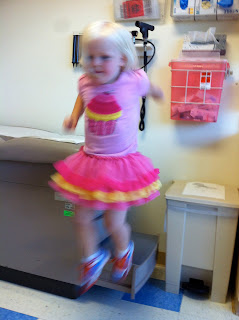 We settled on jumping off the step instead and made a balloon out of a glove, that never gets old. Of course, Claire was spectacular, no episodes, stress or seizures. Her doctor and I formulated our plan of what we will do if and when things get worse. A plan I hope never to use but am glad to have. On the way home, Claire was able to get her sisters purse around her arm all by herself and it didn't even give her a seizure. So I guess it was just a normal day and I guess I can deal with normal I like this, it isn't that bad? Right? I'm just going to keep saying that and I know that at some point I will believe it, at least for awhile. 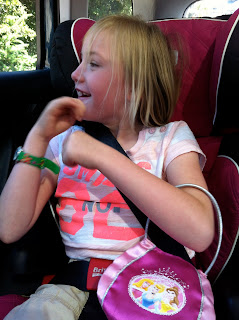 Chloe is just about to fall asleep and I am about to pack my bag. Tomorrow I will get to take an airplane, far, far, away (New Orleans) where everyone is normal, well as at least to me.
Posted by Colleen at 8:16 PM No comments: