Since returning from the trip I really haven't talked about it much, after finally talking about it with friends I think I am ready so here goes. Thursday morning we went into the girls' room to find Claire covered in vomit, pretty much my worst nightmare. I held her and contemplated the reality of why we were going on this trip, because she has a life threatening condition, my heart sank. The vomit was dry and matted in her hair, she was weak, it wasn't good. We made a bath and washed her hair, with that she perked up a bit so we figured it was most likely reflux and she was fine to go to school for a few hours before we left for the flight. She got dressed in her new skirt for the trip and ate breakfast well. Once we got to school her aide and her OI instructor met us in the parking lot. Before taking her seat belt off we talked for a moment to give her some time to process. Just before I went to get her out she vomited violently, poor little thing, even out her nose. So we went home. The limo was coming to pick us up in just over an hour and Claire didn't look like she was in the mood for a big fun trip. I called Make A Wish and was surprised when they said this happens often. After a short nap and a snack, she started to surface. About half way to the airport she was all smiles and back to the vibrant Claire that we love so much, there was a huge sigh of relief. We had a "Home Alone" style rush through the airport. By the time we got to the gate everyone was lined up and pre-boarding was about to begin. Southwest Airlines, was amazing! The guy at the gate helped me down the jetway as I had both girls (in two separate strollers) while Jared went to get lunch for Claire. The flight was short and sweet, Claire enjoyed Dr. Seuss on the ipod until she fell asleep. The guy in front of us had his hands full with the cutest little girl (Chloe) who was jump 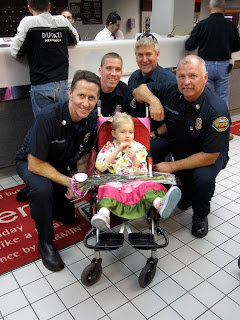 ing and climbing all over the place. Everyone got off the plane and Claire was still asleep. Jared went to get her wheels set up and was greeted by 4 Orange County firemen and a Sheriff. They had come on their days off to help us! They had a big welcome sign for "Princess Claire and the English family" Gift's in Ariel gift bags, flowers for Claire, even toys for Chloe. For the first time in my life I walked through the airport with not a thing to carry. They pushed the strollers and carried the bags, it was unbelievable! By the time they loaded the luggage into the car for us, both Jared and I were fighting back tears. We exchanged hugs good bye and were on our way. Their presence encouraged Jared and I in a way that I really can't put into words, I will just leave it at amazing. We headed straight for the hotel to get settled in. Just a bunch of normal stuff, Jared got lost and a possible traffic ticket on the way to two different grocery stores trying to get the right food for the girls, Chloe screamed for about an hour (my parents heard her in the room across the hall) and Claire slept through it all. I sat and watched as she occasionally smiled in her sleep, I assume she was having unbelievable mermaid princess dreams. Friday was our first day, we went to Disneyland and got the largest cinnamon bun ever for breakfast. Then it was over to California Adventures for the princess filled lunch at Ariel's Grotto. Being overwhelmed we forgot about Claire's desire to use the potty and she got pretty upset at us, but she made a quick recovery and had a great time with all of the princesses. She was so excited that she was asleep at the table before dessert got there, always a good sign of a lot of fun. Saturday was the big day. Claire loved having breakfast with Minnie Mouse, who kept coming to our table and admiring Claire's pink glitter shoes. She also enjoyed the pancakes, her favorite. After breakfast we headed into the Magic Kingdom where Claire met her fairy-godmother-in-training. We picked out a dress and then Claire enjoyed sitting while her hair was done up. It seemed that the day was going well, dress up is one of her favorite things to do. Disney has an official "Wish Lounge" that we were able to go back to and rest a bit. Claire enjoyed her lunch while watching Aladin, I think a new favorite. Then we were off for the big meeting with Ariel. Of coarse I left the paperwork in the room and remembered the wrong place to meet, because I am awesome! After a bit of stress amongst the grown-ups we figured it out and made our way down to see Ariel. We were ushered into a private room that was nice and quiet. Ariel came in and sat right next to Claire. She started to talk to Clai 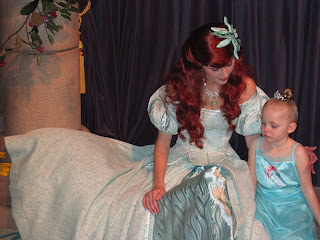 re and asked what she had enjoyed. Claire's sweet little lips started to move, yet no speech came out so I offered an answer for Claire's approval. Her eyes swelled up with tears, bottom lip quivering. She wanted so badly to answer herself. Ariel was great but it was too late, the weeping intensified and she was screaming and very unhappy. It was about a 6 minute walk back to the wish lounge. People starring at the girl in the wheelchair who was so deeply upset. I kept playing it over, I don't think I could have done anything different or better, it was bound to happen. I thought that the whole vomit thing was a nightmare, having Claire's one wish ruined by her physical limitations, worse. We sat and watched Aladdin and she fell asleep. I sat there sobbing, feeling like such a failure. All I wanted was for her to have one day that Rett didn't ruin, too lofty of a goal for now, maybe someday. I do have to say that the cast at Disney was great. They wanted Claire to come back if she was up for it and would do anything to make it happen. After resting we decided to wander in that direction and test the waters, turns out there were white caps. It was such a blessing to have my parents with us as my dad took Claire for a walk as she just wasn't really happy. Wouldn't you know that 10 minutes later they returned, Claire had a Minnie Mouse doll on her lap and a huge smile on her face. We mentioned that Ariel might be around and asked if she would want to say hi again, she lit up, a sure "Yes!". Jared went and made the arrangements and they took Claire back to meet her right away. Ariel was so genuine and glad that Claire came back. She wanted Claire to 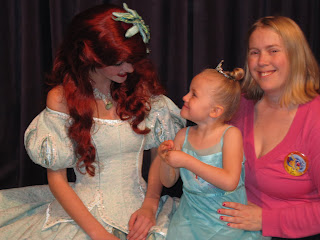 hang out all day, her friend Snow White even came by to say hello. I could see that the Princess Faire was going and Ariel was late, but she had all the time in the world for Claire. It turned out that she too loved Minnie Mouse's pancakes and gave Claire a tip on Minnie's chocolate chip cookie, who knew that the two had so many favorites in common. We left only because we decided to go on a hunt for cookies, with Claire who had a giant smile on her face. That night Jared and I had reservations for dinner, I was numb. It had been so low, and so high. The goal was to just keep breathing, which I did. Sunday my parents had to go but my brother joined us. It was so special that Andy came to help, he took Chloe duty while Jared and I went on rides with Claire. Crazy that a year ago I hadn't spoken with my brother 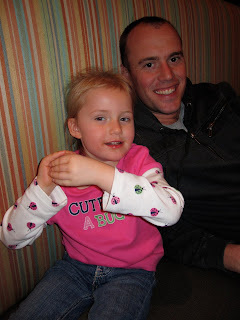 for about a year, and here he was, such a joy to be with and have fun together. I think that one of my favorite parts of the trip was when he was trying to convince Claire to share her chocolate parfait that she got for dessert. The girl likes her chocolate, but with a lot of persuasive smiles, she obliged to share with Uncle Andy. In that moment she spoke so clearly with her gestures, it was as if she was a typical little girl who was just playing silent in an effort to keep all of her dessert for herself. Claire got her story book ending, which is really all that matters. So if somebody asks how the trip went, I'll say good. What I will mean is good, in good in a rip your heart out, stomp on it, put it back in and it works even better sort of way.
Posted by Colleen at 9:36 AM

Awesome post colleen! it made me cry and smile and laugh! :)

So glad the trip was a success. Well said my friend! Big hugs from MI!

I just searched for your blog and found it and just read this. So happy and sad and happy again, all at the same time.

Colleen
Santa Cruz, CA
Most of my time is spent getting to know our little gift Chloe and working to enable her big sister Claire. I love motorcycle rides with my husband and walks along the cliffs. I can't believe that God has given me so much, I am just trying to soak it all in.

Promote Your Page Too

As defined by Webster:

or·gan·ic
4 a: forming an integral element of a whole : fundamental b: having systematic coordination of parts : organized c: having the characteristics of an organism : developing in the manner of a living plant or animal organic>